Let's get started
You are here: Home / Public Relations / Is your business crisis-proof?

Making sure your business is crisis-proof in this digital age of communication is a must.

In the highly regulated world of financial markets, crisis situations are bound to happen. As it’s been said, it is not a matter of if, but when. And given the speed and nature of communications in this digital age, a crisis may hit sooner than you would have expected.

One of the themes he explores in the book is the ‘Fiasco Vortex’.  As you can imagine and as the term suggests, this (fiasco vortex) is a place where no one wants to be. According to Dezenhall, the speed of communication and the instant nature of social media in this digital age play a big role in the development of a fiasco vortex.

Dezenhall describes this vortex as a snowballing effect, vicious circles and feedback loops that magnify destructive information and spread beyond the reach of available treatment. In his view, this situation is one part crisis and three parts farce. And the farce encircling the crisis is whipping it into an exponentially destructive beast.

As he traces the changes in the nature of communication and controversy, Dezenhall says the viral nature of controversy and communication in the digital age could render the once-mighty corporations, big businesses and high profile individuals powerless when they face a scandal – when they are caught in the fiasco vortex.

Dezenhall, who started his communications career as an aide in the White House Office of Communications during the Reagan administration, also comments on the ‘addictive quality to the consumption of controversy’ in this age of social media. 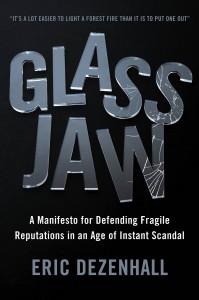 Given the frenzy that is feeding on the initial news or controversy, no one is immune. Not only big corporations or high profile personalities are the examples of glass jaw targets, says Dezenhall. Even common people can find themselves in humiliating situations.

Though the book is not a ‘how to’ in crisis management, Dezenhall shares many cases of big corporations, high profile sports personalities, politicians and other influential people and businesses that have been through some controversies in the recent past.

And while it does not offer a step-by-step process on how to deal with crises situations, the book emphasizes that “reputational damage is an extremely tangible phenomenon that can ruin lives, careers and businesses.”

“It’s a lot easier to light a forest fire than to put it out. Even after the fire fighting is done what remains is a big mess. The realistic objective of a crisis management is to endure controversy, not escape it.”

Have you or does your business have a crisis management strategy in place? Now may be the best time to get one prepared.